When does your audience pay the most attention in your demos? At the beginning? In the middle? At the end? When do they pay the least attention...? And what do they really remember from your demos?

A simple exercise may provide answers that surprise you and convince you to consider “turning your demos upside down” – to improve the win rates for your demos.

Here is a terrific experiment to run on your own:

Read the list deliberately, then pause a few seconds and say, “Now please write down as many as you can remember…” Let them write as many words as they can (no cheating, please!).

Now create a grid with 10 columns and as many rows as there are people in your group. Poll your group to determine how many people wrote down each word on your list. The resulting plot will most likely look like the following (we used 20 people in our group): 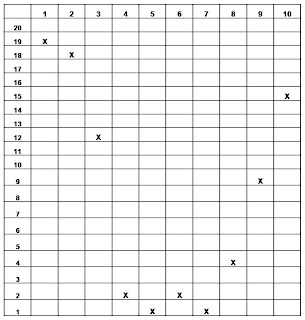 Wow…! What does this mean? It means that most people hear the first few things you say, then they rapidly lose track. The middle portion of what you present is essentially lost. Finally, at the very end of your list your audience regains an increased level of retention – but not as high as at the beginning. This should be both very instructive – and very frightening!

If you draw a rough curve through the “x’s” in your plot above, you’ll get what is called the “Attention-Retention1” curve – and it clearly shows why traditional demos are at risk.

In a typical demo, the presenter often begins by “orienting” the audience to the software. This may include how to log in (yawn), the layout of the menus and navigation tools (yawn again), the ability to customize the “home” screen (looonnnng yawn), and an introduction to the context-sensitive help system (snore…).

This banal opening is then followed by introducing the names of several fictional characters and a long, convoluted demo that embraces multiple customer roles and multiple workflows. Interruptions and questions take the demonstrator down “rat holes” and off your agenda into areas of interest only to a limited few in the audience.

Finally, after far-too-many minutes, the presenter reaches the end-points for the various workflows and then discusses the broad range of pre-built, yet flexible reports that are available in the package (but doesn’t show any that are particularly interesting).

What has happened to the audience’s attention during this process?

At the beginning, when audience attention was highest, the presenter squandered that opportunity by presenting some of the least interesting aspects of the offering. The audience quietly tuned-out for much of the middle portion and then finally perked up towards the end of the demo when they realized that their torture was about to end!

Based on the Attention-Retention curve we created above, what did the audience remember from the demo? Most likely, they remembered two areas:

1. They remembered a good portion of how to navigate, generally, through the software; and
2. That there is a huge number of potentially confusing reports to wade through…

Was this a successful demo? Most likely not!


Elvis Has Left the Room

But that isn’t the worst part. When do your customers’ high-ranking people arrive at a demo meeting and when do they leave (e.g., C-level, VP’s, Senior Directors…)?

If you answered, “late and early” you are both cynical and largely correct!

High-ranking participants at demo meetings typically arrive just about right on time. They often take a seat, quietly, in the rear of the room. They may ask a question or two. But if they don’t see something that compels their interest, they’ll typically leave after 10-20 minutes.

Given our traditional demo above, it is rather likely that the high-ranking executives won’t stay very long. Even worse, they’ll only see (and remember) some of the least important aspects of your offering.

Here’s a graphical view of what happens in a traditional demo: 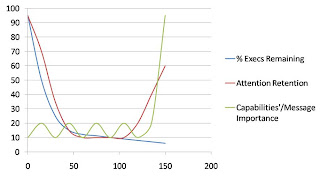 Summary? In traditional demos, many of the most important capabilities and messages are delivered towards the end of the demo – when Executives are often gone and interest is only moderate. Is there an alternative approach that yields better results? Why, yes indeed!


Do the Last Thing First

The Great Demo! method is based on turning a traditional demo upside down. A Great Demo! starts off with the biggest “Wow!” for the targeted audience members right at the beginning, then peels back the layers of your offering in accord with the audience’s depth and level of interest.

By starting with the most interesting aspect of the software – the pay-off – your audience becomes more interested and attention-retention improves. Making the demo a “conversation” with your audience, rather than a “presentation”, also improves attention. Questions are more focused and less likely to come from “hostiles”.

Interestingly, execs tend to stay longer in the room when the Great Demo! strategy is employed and these executives are more engaged. Equally interestingly, practitioners of the method report that the overall length of their demos are shorter.

Most importantly, organizations that have adopted Great Demo! report that their win rates increase and that they do fewer demos overall to get the business.

Here’s a graphical view of the Attention-Retention curves in a Great Demo! 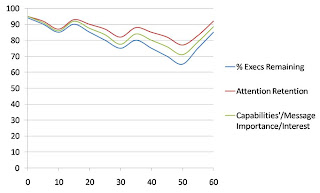 The curves tend to stay tightly together for the first 6-8 minutes. Starting with the pay-off engages your audience right away – you can actually see people learn forward in their seats!

As audience members begin to participate in the demo conversation (“That screen is great – can it be modified to show more columns…?”), interest oscillates in small waves. By summarizing as you conclude each section, you cause attention and information retention to increase.

A final summary at the end of the demo, recapping the highlights of the material presented, tends to drive attention levels upwards again – you can often see people nodding their heads in agreement as you summarize.

1 The Attention-Retention curve and exercise was developed by Michael Blanchette and is used with his permission.